Warning: "continue" targeting switch is equivalent to "break". Did you mean to use "continue 2"? in /homepages/34/d177173960/htdocs/stylizedcharacter/wp-content/plugins/customify/class-pixcustomify.php on line 1585
 Latvian Komedie Minute - Stylized Characters

A new Series of Shorts

After finishing Love in the Time of Advertising, an epic 8 minute fully CG short film which took many years and required me to sell small portion of my soul to the devil, I promised myself and my girlfriend that I’d never make another short film again. Unfortunately for her and I the storytelling bug was still burning away. Short films and storytelling allow me to still find the joy in what can be a very demanding career. So the question then became how do I make it easier to do.

Well for one it would have to be shorter. The internet in it current evolution is built for small packages of content anyways. 30 seconds to a minute seemed like just the right amount of time to introduce a character and put him a single situation. David Bokser, who co-created Love in the Time of Advertising, came up with the idea of having a character telling single jokes to camera. Seemed achievable and fun if the jokes were the right fit.

CG animation is very time consuming so if there was a way to do less CG in this CG animated short that would be nice as well. When I was at Psyop we did a series of spots where we used a motion-control camera to shoot a miniature set and then added our CG characters. It drastically cut down on the amount CG creation and rendering that had to be done. Add to the mix the purchase of a 3D printer and it made sense to build and shoot a miniature set ourselves. Toss in a little Reddit and you get The Latvian Komedie Minute a series shorts featuring a Latvian Farmer telling jokes that are only funny in how depressing they are.

Rough concepts for the main character in the Latvian Komedie Minute by Victor Malcervelli.

First thing was to design the character and set. For this we turned to Victor Malcervelli a talented concept artist and 2d animator with whom I’d worked before. After discussing the needs of the project he came up with a series of varied designs for the character and set from which we narrowed down towards a final look. After the character matched the look that was required, Victor produced as turnaround sheet to model off of in 3D. 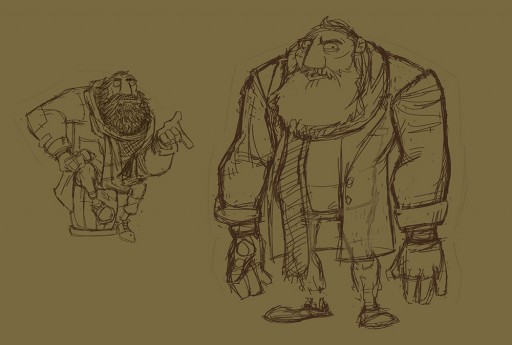 2D turnaround of character for the Latvian Komedie Minute by Victor Malcervelli. 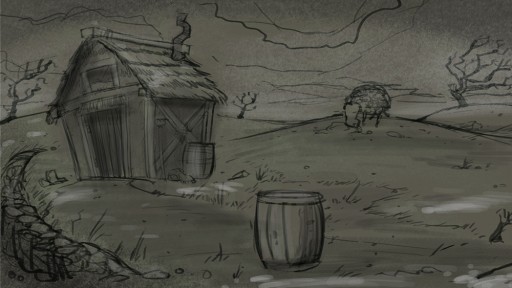 Victor repeated the same process for generating the concept for the background. For the background though it was purposely left a little rough to leave room for any changes that might be needed during the construction of the miniature.

In the next post I’ll talk about starting the proof of concept for barrels on the 3D printer. The makerBot Replicator 2. 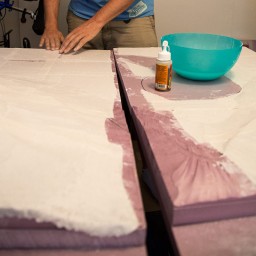 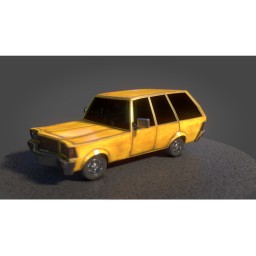 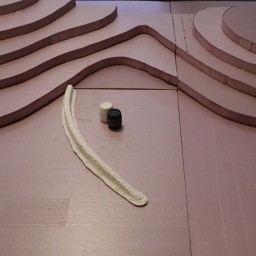